A conservative breed of voluntary paid leave laws, backed by the life insurance industry, is emerging amid the slow spread of paid family leave programs in Democratic-led states.

The opt-in paid leave model is one answer to growing public support and policy maker discussions around giving workers time off for caregiving and health needs. Under the model, insurers sell paid family leave insurance to employers that want to add it to their employee benefits packages.

Virginia’s legislature this year became the first to authorize this type of insurance. A similar, model bill is awaiting final approval from the National Conference of Insurance Legislators this month, offering a template for other states to use.

But it’s unclear whether opt-in paid leave would make a dent in the large percentage of US workers who lack access to paid time off.

Paid family leave, which covers tending to a new child, a family member’s serious health problem, or needs related to a family member’s military service, is available to less than a quarter of private-sector US workers, according to the US Bureau of Labor Statistics.

“Just the sheer volume of proposed bills shows the interest and need for these types of programs,” Iskra said at a webinar hosted last month by the Disability Management Employer Coalition. “While there seems to be agreement that paid family and medical leave is a critical and important benefit for employees, there are certainly differences of opinion on how to deliver the best solution.”

The Virginia law, which took effect July 1, allows employers to purchase paid leave insurance, but doesn’t mandate that employers provide such leave, nor does it guarantee workers that they’ll have access to paid time off.

No insurers have filed a paid family leave product with Virginia’s insurance regulator for approval yet, but one is expected next year, according to Katie Johnson, a policy advisor with the Virginia Bureau of Insurance.

Virginia’s opt-in approach is a contrast from the 11 states plus the District of Columbia that have enacted mandatory, state-run paid family and medical leave programs—most recently Delaware and Maryland—that require payroll tax contributions and ensure that most workers are covered.

Democrats in the US House passed a nationwide paid family and medical leave proposal in 2021 before it stalled in the Senate, leaving the action on paid leave policy to the states. 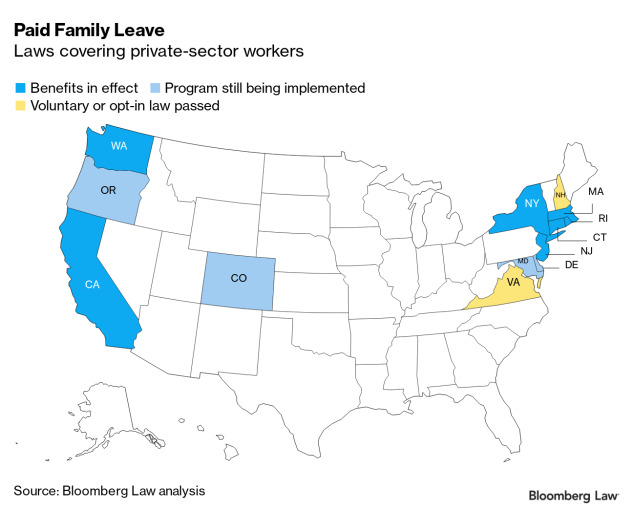 The insurance industry sees the opt-in model as attractive in states without a mandatory program, particularly when employers are looking to recruit and retain employees in a tight labor market.

“One of the beauties of the NCOIL model is that it’s written to be flexible” for insurers and employers, said Cindy Goff, a vice president at the American Council of Life Insurers, an industry association.

Goff said ACLI, which helped draft the model bill, plans to urge states to consider it.

“The private sector has all the tools and experience to build these products, we think, better than the government can,” she said.

But those opt-in approaches wouldn’t benefit lower-wage workers in the way that mandatory, state-run programs do with their coverage guarantees and focus on benefit amounts that are high enough that low-wage workers can afford to take time off, according to Shabo.

To the extent that state lawmakers pursue voluntary paid leave laws, they should require a study to track how many employers choose to offer the benefits and how workers use them, Shabo said.

“Legislators can’t claim they’re providing paid family leave if all they’re doing is authorizing the sale of a product without any indication that people are getting the benefit of the leave,” she said.

Life insurance companies have long been involved in the medical side of paid leave via disability insurance. About 40% of US workers have short-term disability coverage versus 24% with paid family leave, according to the Bureau of Labor Statistics.

But paid family leave as a private-market insurance product is still in its infancy, said Mike Brown, spokesman for online insurance broker Modern Insurance Agency Inc., which does business as Breeze.

“If we can figure a private-market solution to getting more parents paid leave, I think people would be all for it,” said Brown, whose company recently rolled out a new paid parental leave insurance product. “There’s definitely a lot of room to grow.”

New Hampshire, meanwhile, is pursuing a different version of voluntary paid leave, setting up a paid family and medical leave benefit for state government employees and then offering private-sector employers and workers the choice to join it. The state contracted with MetLife to run that program.

Legislation similar to the NCOIL model bill passed the GOP-controlled Minnesota Senate this year (SF 3885), but didn’t advance in the state House, where Democrats hold the majority.

The idea could have legs again next year in the state, plus other legislatures that aren’t interested in mandatory state-run programs, said Minnesota state Sen. Paul J. Utke (R), a co-sponsor of the NCOIL model legislation who is also an insurance agent.

“Employers have got a lot of say in it. This is nothing mandated on them. They get to use it to fit their business model,” he said of private-market paid family leave insurance. “When we get mandates, there are a lot of unintended consequences.”

Utke’s cosponsor on the model legislation, Arkansas state Rep. Deborah Ferguson, is a Democrat from a GOP-majority state legislature. She didn’t respond to a request for comment.

But even if private-market insurance helps paid family leave coverage catch up to short-term disability, that would leave half of the US workforce uncovered and most of the benefit would go to higher-income workers, Shabo said.

Fri Nov 11 , 2022
This article first appeared in the Morning Brief. Get the Morning Brief sent directly to your inbox every Monday to Friday by 6:30 a.m. ET. Subscribe Friday, Nov. 4, 2022 Today’s newsletter is by Julie Hyman, anchor and correspondent at Yahoo Finance. Follow Julie on Twitter @juleshyman. Read this and […]