A Mormon family – including five children – were found shot dead inside of their rural Utah home by the family patriarch on Tuesday. The children’s father then turned the gun on himself.

The bodies of Michael, 42, and Tausha Haight, 40, their five children and Tausha’s mother, Gail, 78, were found on Wednesday in the town of Enoch with gunshot wounds.

The children were only identified as three daughters, aged 17, 12, and 7, and two sons, aged 7 and 4 years old. Police had been called to their home to perform a welfare check by other family members.

It was later revealed that massacre occurred shortly after Tausha filed for divorce from her husband, reports KSL. Until last week, Michael had been working as an insurance agent for Allstate.

A statement from Enoch City Manager Rob Dotson identified Michael Haight as the only suspect in the crime. Dotson said: ‘While this intense investigation is ongoing, investigators currently believe there are no suspects outstanding. Evidence suggests that the suspect took his own life after killing seven others in the home. The suspect is 42-year-old Michael Haight.’ 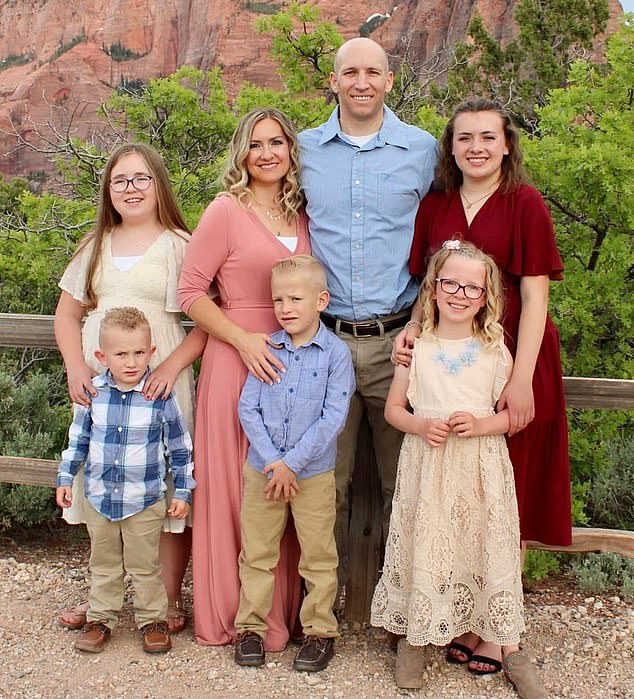 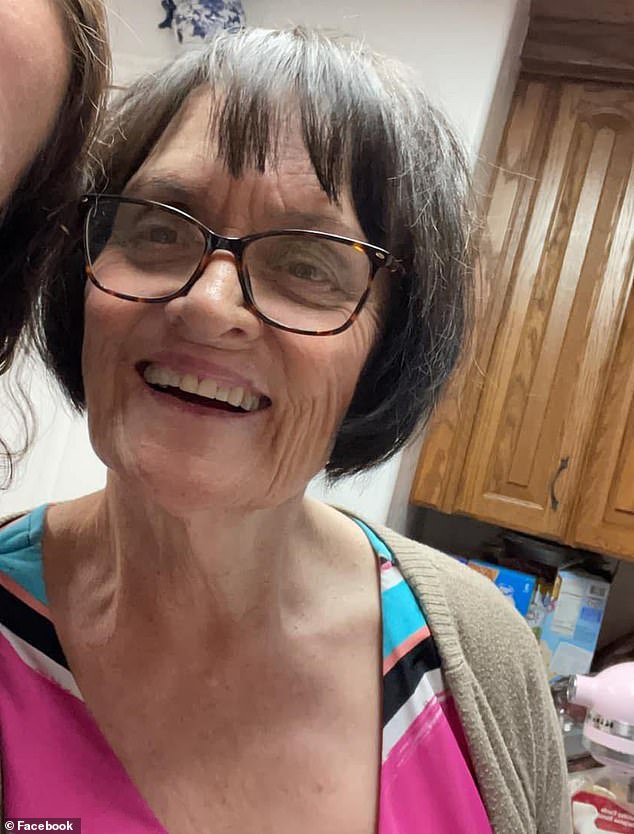 Tausha Haight’s mother, Gail Earl, 78, was also killed in the massacre, her husband, Boyd, died in 2020

Online records show that Michael Haight worked as an insurance agent for Allstate and the he ran a financial services business out of the family’s home along North Albert Drive in Enoch.

Fox Salt Lake City reports that Michael had recently left his job at the insurance giant. The station also noted that Tausha filed for divorce on December 21.

James Park, who represented Tausha Haight in the divorce case, said she had not expressed any fear that her husband would physically hurt her but he declined to elaborate, citing the investigation into the killings.

Park said he only met with her twice, mostly recently on Tuesday, and said she ‘was an incredibly nice lady.’

In a press conference, Dotson said that authorities entered the home around 4:00pm on January 4th.

The alarm was first raised when Tausha did not show up to an appointment, Dotson said.

At the same press conference, the town’s mayor Geoffrey Chestnut said through tears that he was a neighbor of the Haight family and that their children played in his yard.

Officials said that the family was known to law enforcement and that they had been to the home previously for unspecified reasons. None of those visits occurred recently.

Neighbors of the family told KSL that they were active in the town’s Mormon community and described them as ‘very welcoming.’ 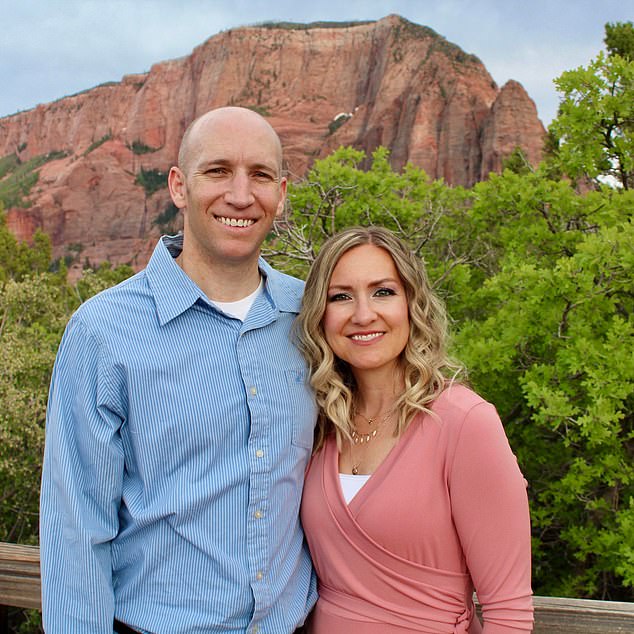 It has been revealed that Tausha, right, had filed for divorce from her husband, Michael, on December 21 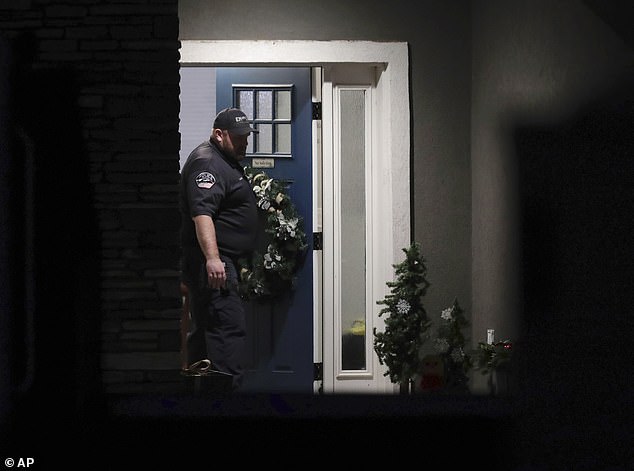 Tausha’s Facebook page is littered with images of her family, the most recent shows her with her husband in June 2022.

Her mother, Gail, lived with the family. Her husband, Boyd Jay Earl, died in 2020 at the age 77. He was a veteran of Desert Storm and was a Green Beret, according to his obituary.

A neighbor, Tina Brown, told Fox Salt Lake City: ‘Tausha was the most kind and generous person and she never ever said anything ill about anyone. She would give the shirt off of her back for anyone and she served people tirelessly.’

While another neighbor, Tom Deville, told the station: ‘I just feel terrible, they were just really nice people and I mean, it’s going be one of those things that who knows.’ 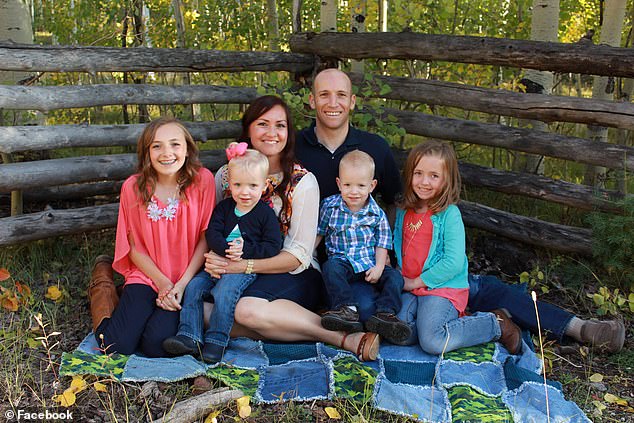 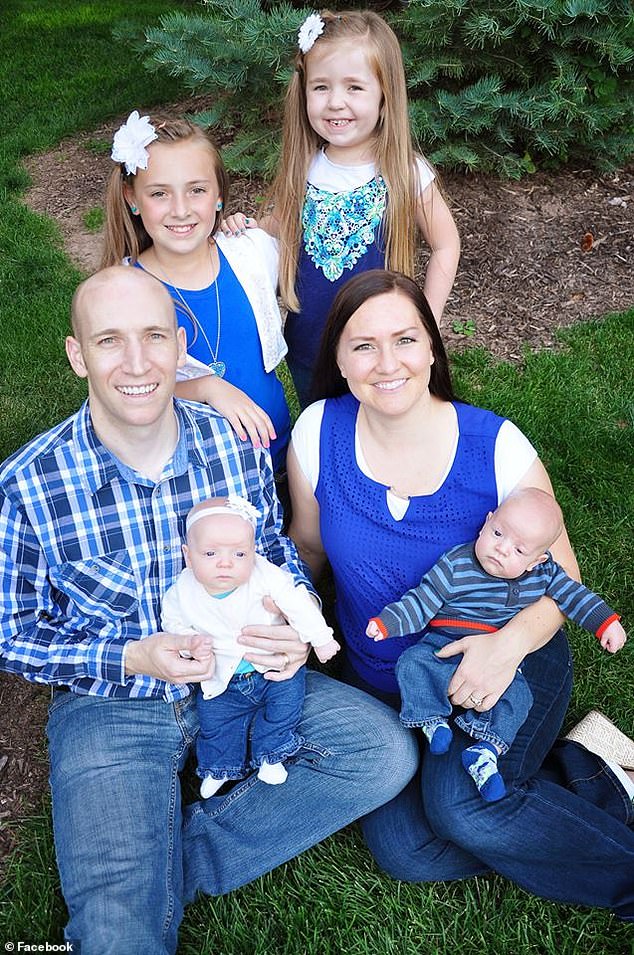 He was in Boy Scouts as a young boy and earned the ‘Faith in God’ award as a fourth grader. Two years later in 1992, another newspaper article showed that he had won a ‘Gospel in Action’ award from his church.

His picture appeared again in the newspaper in 1998 when he was finalist for an academic award in high school for business and marketing. After high school, he served a church mission in Brazil and then married Tuasha at a church temple in St. George, in 2003. She was from Overton, Nevada, located just two hours south of Cedar City, where he grew up. 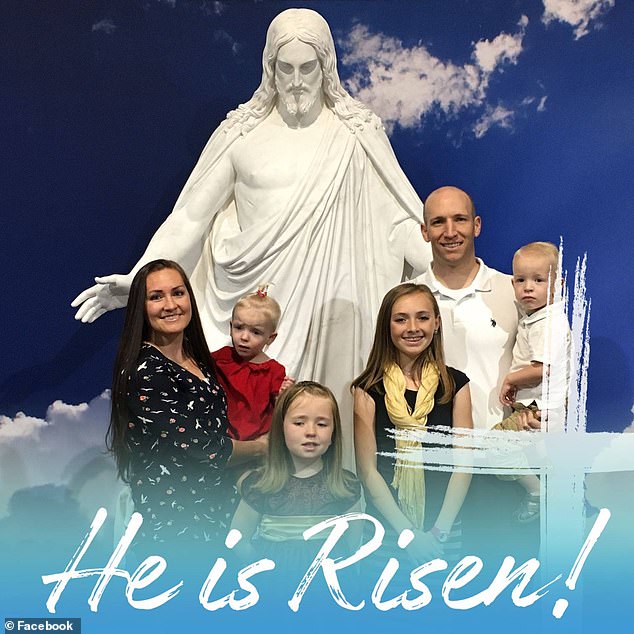 A neighbor, Tina Brown, told Fox Salt Lake City: ‘Tausha was the most kind and generous person and she never ever said anything ill about anyone. She would give the shirt off of her back for anyone and she served people tirelessly’

Dotson earlier said that the community was sent reeling by news of the eight bodies and that the deceased – all members of one family – were well known in the southern Utah town.

‘Many of us have served with them in church, in the community and gone to school with these individuals,’ Dotson said in a video statement Wednesday night.

‘This community at this time is hurting. They’re feeling loss, they’re feeling pain and they have a lot of questions,’ Dotson added, noting that officials planned on releasing more information as it becomes available and the police investigation progresses.

‘We won’t know the mindsets, the thoughts of the individuals who experienced this tragedy, but we all can pray that their families and the neighbors and all will come to an understanding of what happened in this place, probably in a day or two, or maybe longer,’ said Dotson, choking up at one point. 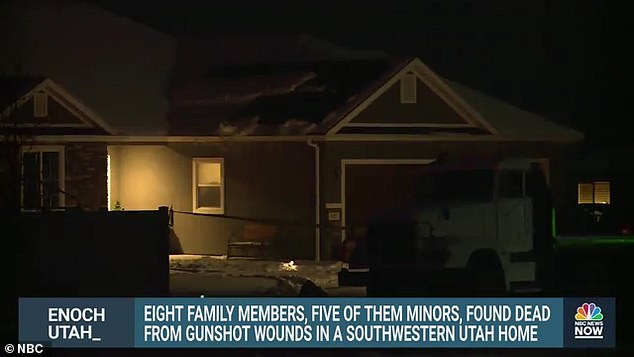 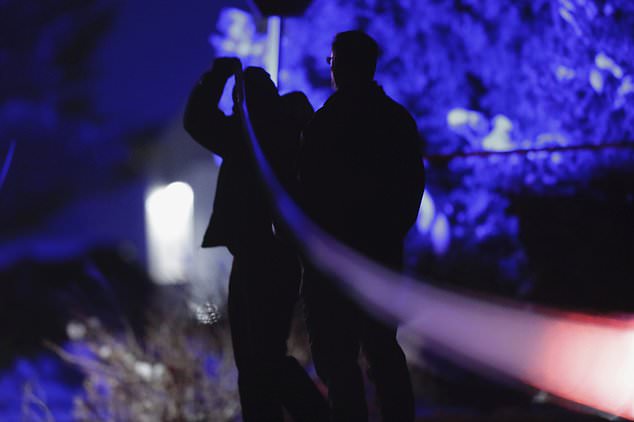 Law enforcement officials stand near the home. Police said they did not detect any threat to the public 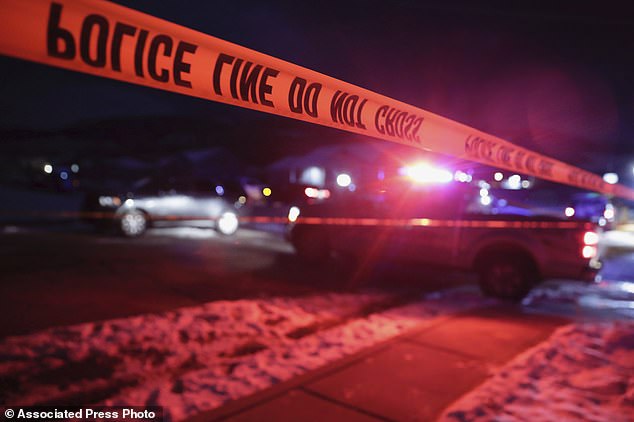 Police tape surrounds the crime scene in Enoch, Utah, where eight members of a family were found from gunshot wounds 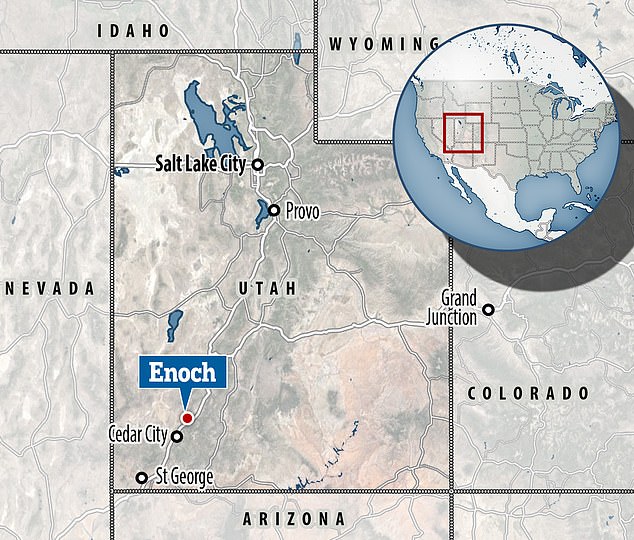 Welfare checks usually take place when neighbors raise concerns or when individuals have not been seen for an extended period of time.

The five children attended schools in the Iron County School District in Cedar City, officials said in a letter sent to parents.

The letter posted on the school’s website said: ‘It is with deep regret that we inform you about a tragic loss to our school community.

‘This afternoon on Jan 4, eight members of a family residing in Enoch with five students in our schools tragically passing away.

‘This loss is sure to raise many emotions, concerns, and questions for our entire school district, especially our students.’

It added that a Crisis Intervention Team would help students, parents and staff during the difficult time.

The total enrolment is approximately 8,900 students.

The town, off Interstate 15 in rural Utah, just north of the city of Cedar City and about 80 miles west of Bryce Canyon National Park, had major flooding in 2021 that caused damage at hundreds of homes.

Cox tweeted: ‘Our hearts go out to all those affected by this senseless violence. Please keep the community of Enoch in your prayers.’

Enoch Police said in a press release: ‘At this time, we do not believe there is a threat to the public or that there are any suspects at large.’

They added that an investigation is ongoing and more information will be released at a later time.

Sun Jan 8 , 2023
Starbucks is adding a new, limited-run, cold brew option, reflecting continued sales growth in the cold drink category at the coffee chain and the industry in general. The coffee giant today unveiled the Pistachio Cream Cold Brew. The new, iced option is part of Starbucks’ winter menu. The drink is […] 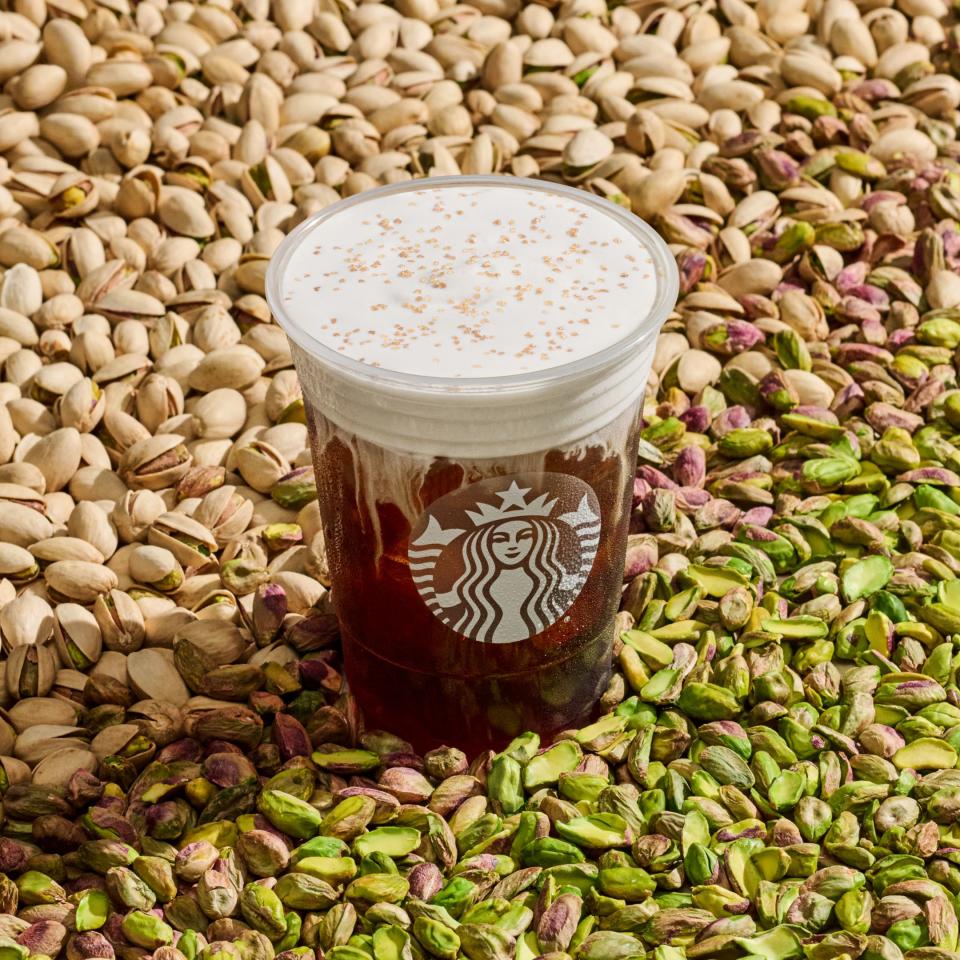