George S. Farra (far left), co-founder and principal of Woodley Farra, and the team at Indianapolis-based financial advisory firm, which comes in at No. 1 on the CNBC FA 100 list for 2022.

More than a decade ago, he invested his clients in Hewlett-Packard, a choice he’d come to regret.

During the five years they held the stock, its share price “never really went up from the time that we bought it,” said Farra, which he attributed in part to the constant turnover of management at the company.

“And we hung in there. It was a tough, tough slog,” he added. But he learned from that experience.

“The Hewlett-Packard experience is at the forefront when we’re making a decision about buying a new stock,” Farra said. “When a company enters a period of management turmoil, it’s a good idea to move on. At the end of the day, you’re buying management.”

Here’s a look at more coverage of CNBC’s FA 100 list of top financial advisory firms for 2022:

Overall, his firm, Woodley Farra in Indianapolis, sells fewer than a quarter of its stocks each year. It’s content with the performance of its other selections, some of which have remained the same since Farra co-founded the firm in October 1995, like Chevron. A $10,000 investment in the energy company back then would be worth around $175,000 today, according to Morningstar Direct.

“We take the attitude when we’re investing in a company that we’re becoming owners of that company,” said Farra, who earned a bachelor’s degree in finance from Indiana University in 1982. He is also a chartered financial analyst.

A mission to offer investors research and planning

Farra opened the firm 27 years ago with his partner, Don Woodley, after noticing a shortage in Indianapolis of financial advisory firms that did individual research on stocks and provided clients with comprehensive financial planning.

Today, the firm has 11 people on staff, six of whom are CFAs. People usually train for around four years to get that designation, studying investments, corporate finance, economics and portfolio management.

Most of the heavy research at the firm is geared toward making choices that will turn enough of a profit to get clients through the era of their lives when the paychecks end.

“Our planning is focused on helping clients forecast how their portfolios are going to look in retirement,” Farra said.

“What we’re trying to do is to help the client bring the future into the present,” Farra said. “We help them prepare by encouraging savings and putting as much of their portfolio as possible into the stock market.”

Something that makes Woodley Farra a little unique, he said, is that since it first opened, it is focused on buying dividend-paying stocks.

That strategy — in which companies pass on a portion of corporate earnings to shareholders — wasn’t highly popular nearly three decades ago, but it led Woodley Farra’s clients to actually see their portfolios rise for much of the early 2000s bear market.

“The payment of a dividend conveys a lot of information about the company and its prospects,” Farra said. It indicates that it probably has a healthy cash flow, is profitable and likely will continue to be so, he said.

It’s similar to what Warren Buffett looks for at a company, Farra said: “He likes cash flow.”

What we’re trying to do is to help the client bring the future into the present.

co-founder and principal at Woodley Farra

Despite recent drops in the market and fears of a recession, Farra believes investing in stocks is still the smartest way for people to achieve their financial goals. He believes the Federal Reserve will soon get inflation under control and that the worst drops for stocks are likely behind us.

Yet he said people are overloaded with negative or sensational news today that lead to bad decisions.

“Those are all just opinions,” Farra said.

He helps his clients avoid rash moves that tend to be made more with emotions than with logic.

“The data supports that trying to time the market is a fool’s errand,” he said. “And the data is what we go by.”

As a result, the firm is staying out of the cryptocurrency space for now.

Sun Oct 9 , 2022
Job growth slowed for a second month in September as a series of supersized interest rate hikes permeated the U.S. economy, but the softer nonfarm payroll gain is still unlikely to deter policymakers from aggressive monetary action to fight inflation that remains at a decades-high. Here are highlights from the […] 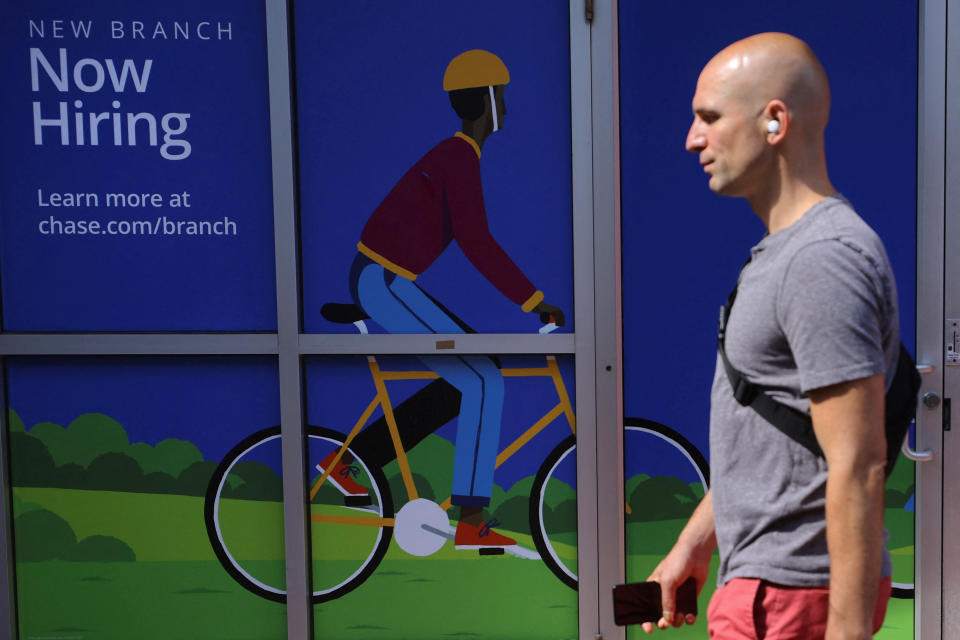