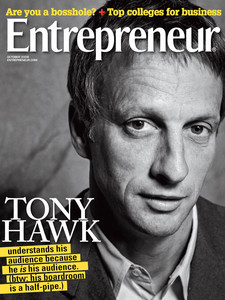 Entrepreneur is an American magazine and website that carries news stories about entrepreneurship, small business management, and business. The magazine was first published in 1977.[2][3] It is published by Entrepreneur Media Inc., headquartered in Irvine, California.[4] The magazine publishes 10 issues annually, available through subscription and on newsstands. It is published under license internationally in Mexico, Russia, India, Hungary, the Philippines, South Africa, and others.[5] Its editor-in-chief is Jason Feifer and its owner is Peter Shea.[6]

Every year since 1979, Entrepreneur has published a list of its top 500 franchise companies based on a submission and review process.[7] The magazine also published many other lists and awards.

In 1996, the magazine launched its website, Entrepreneur.com, which expanded to include features, contests and other publications and spin-offs.[8]

Entrepreneur publishes the Entrepreneur StartUps magazine, available through subscription and on newsstands.[9]

The magazine publishes a blog managed by a dedicated online staff.[10] It is also published in digital editions through its mobile apps.[11]

In 2010, Entrepreneur launched the website SecondAct.com, which is targeted towards an older audience. When launched, the site used advertising as its sole source of revenue.[13]

Entrepreneur also publishes books through its Entrepreneur Press division. The company has a backlist of over 200 titles on business and entrepreneurship.[14]

In April 2017, Reid Hoffman announced the launch of a new podcast called “Masters of Scale”, hosted by Entrepreneur magazine. In each episode, Reid acts as the host, introducing a counterintuitive business theory and proving it out through the episode through a series of conversations with successful entrepreneurs. Masters of Scale is committed to a 50-50 gender balance. The official podcast launched on 5 May 2017 on the Entrepreneur Magazine website but is now hosted at mastersofscale.com. Episodes so far feature guests such as Mark Zuckerberg, Brian Chesky, Sheryl Sandberg, Stewart Butterfield, Diane Greene, John Elkann and Nancy Lublin.

In 2006, unusual web traffic measurements led to allegations that Entrepreneur.com used pop-ups to artificially boost its number of readers.[15]

The company has been involved in many lawsuits regarding its trademark on the word ‘entrepreneur’, suing a wide variety of entities for using the word.[16] The trademark has generally attracted criticism for being on a commonly used word for which there is no substitute, and the aggressiveness with which it is applied has been noted as somewhat ironic; Business Week asked “why would the publisher of Entrepreneur magazine be bullying entrepreneurs?”[17]